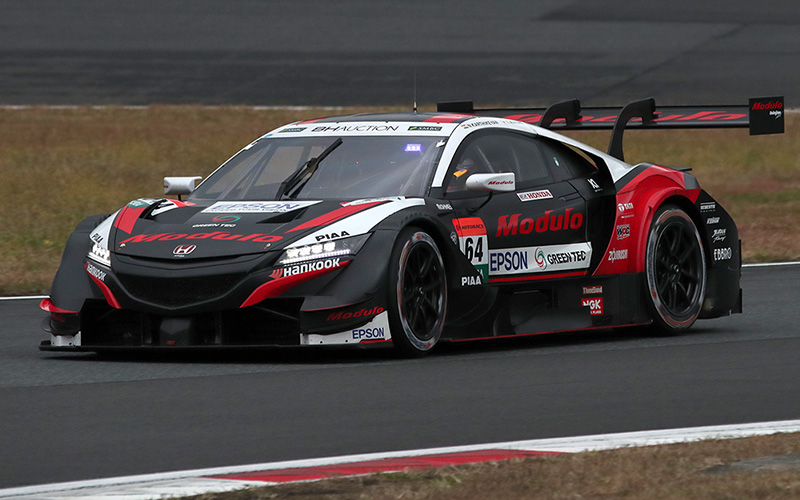 Race 2 of the “AUTOBACS 45th Anniversary presents SUPER GT×DTM Dream Race” (55 min. + one lap) was held in the afternoon of Sunday the 24th of November. In front of some 24,100 spectators, there was finally a spectacle of all-out racing on a dry track for the first time in this race weekend. The winner was No. 64 Modulo Epson NSX-GT, with driver Narain Karthikeyan getting his first-ever win in Japan. The DTM cars also made their best showing yet, with the No. 11 BMW M4 DTM’s Marco Wittmann finishing 2nd and the No. 28 BMC Airfilter Audi RS 5 DTM’s Loic Duval getting a podium finish in 3rd. 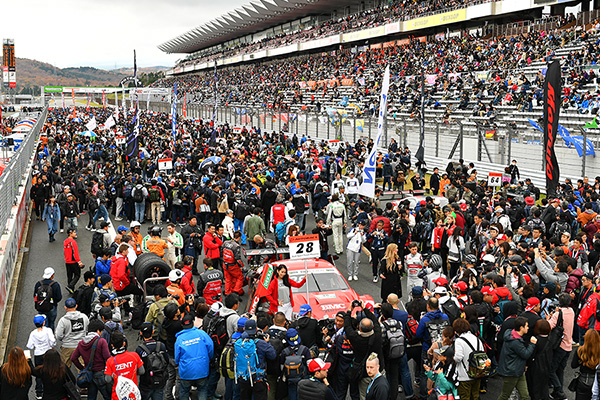 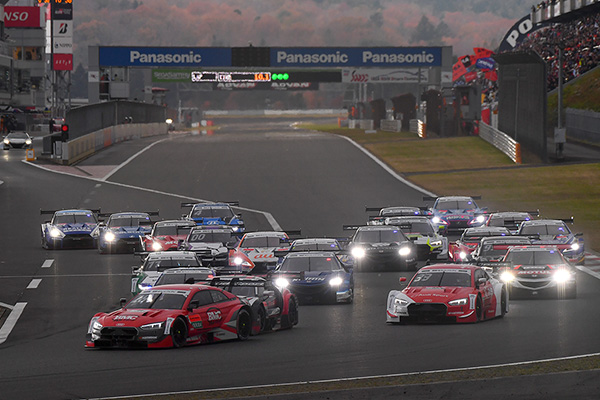 Four NSX-GT cars lead the race in the early going

Before the race, the morning’s rain had stopped and sunny skies returned to Fuji Speedway. This made the track begin to dry out quickly so the race could finally be run in a dry condition. At 2:26 in the afternoon the 22 cars started the race with an Indianapolis style rolling start, somewhat different from that of the usual SUPER GT start.

Although all the cars started out with no problems, but the leading No. 28 BMC Airfilter Audi RS 5 DTM (Loic Duval) seemed to be holding back on its pace, as it was passed on the second lap and then again on the third and fourth laps, losing one position with each lap. Taking over the lead in turn was the No. 64 Modulo Epson NSX-GT (Narain Karthikeyan). The holder of the fastest time in the qualifying, car No. 16 had risen through the leaders to move into to 3rd position by the fourth lap. This meant the four NSX-GT cars were leading the race in the early going.

From 5th position back came three DTM cars, in order from No. 28, the No. 33 Audi Sport RS 5 DTM (Rene Rast) and the No. 11 BMW M4 DTM (Marco Wittmann). Car No. 28 suffered trouble in its left rear tire on lap seven. It returned to the pit to become the first car to complete its routine pit stop and return to the race. But part of the rear fender from car No. 28 had fallen on the track near the exit to the 300R curve. To have that part removed, the Safety Car was brought out for the first time this day at 2:45 on the ninth lap of the race.

This erased the margins of advantage the cars had built up to that point, but when race was restarted the four NSX-GT cars were still in the lead. Following the No. 11 DTM car in 5th place came another NSX-GT in 6th place, the No. 8 ARTA NSX-GT (Tomoki Nojiri). Also, with this restart, the No. 00 BMW M4 DTM (Kamui Kobayashi) was able to move up from 12th position to 8th. 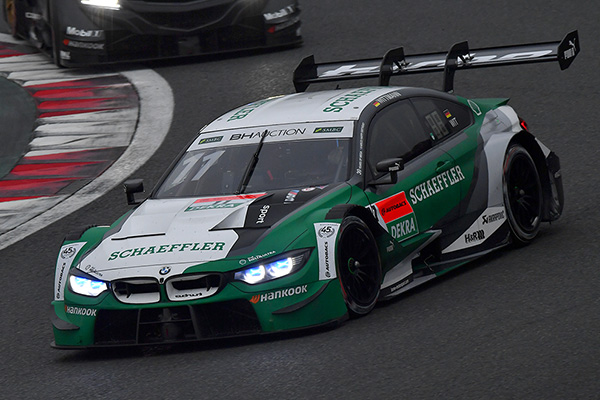 From the 15th lap of the race, a good number of cars had made their routine pit stops, so there was a big change in the race order. Having completed his pit stop during the Safety Car run, the No. 21 Audi Sport Japan RS 5 DTM (Benoit Treluyer) was now leading the race. Car No. 64, which had been leading the race until that point, made its pit stop on the 19th lap. The time margin between it and the leading car No. 21 was 42’591 sec., so getting the lead back would be difficult.

On the 20th lap, however, the left rear tire of the No. 33 Audi Sport RS 5 DTM (Rene Rast) running in 11th position suffered damage and parts of it fender had come off and were scattered on the track. With this, the Safety Car came out for the second time at 3:05 in the afternoon with 20 minutes left in the race. 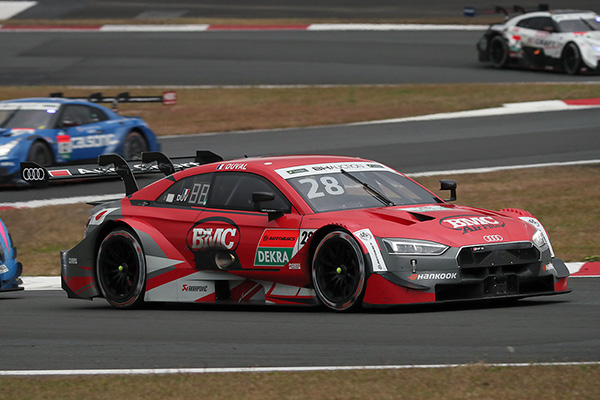 The race was eventually restarted with ten minutes remaining, and No. 21 took advantage of this to return to the pit. Once again, No. 64 found itself in the lead. Behind it, just beyond the Coca Cola Corner cars No. 17 and No. 8, which had been casing car No. 64, collided with each other and ran off the track. What’s more, at the 13th corner there was a crash involving the No. 3 CRAFTSPORTS MOTUL GT-R (Kohei Hirate) and the five LC500 cars No. 38 ZENT CERUMO LC500 (Hiroaki Ishiura), No. 6 WAKO'S 4CR LC500 (Kazuya Oshima), No. 36 au TOM'S LC500 (Kazuki Nakajima), No. 19 WedsSport ADVAN LC500 (Yuji Kunimoto) and the No. 39 DENSO KOBELCO SARD LC500 (Heikki Kovalainen). With this, the No. 12 CALSONIC IMPUL GT-R (James Rossiter) also came to a stop at the end of the straight.

As a result of these two accidents, the Safety Car was brought out for the third time with 7 minutes remaining in the race. With the clock showing 55 minutes of racing completed, the race was restarted. With few laps remaining to race, a usual rolling start was adopted and the leading car No. 64 made a mad dash down the straight. Meanwhile, the battle for 2nd came down to the last lap as a tight contest between cars No. 11 and No. 28 running in 2nd and 3rd place. 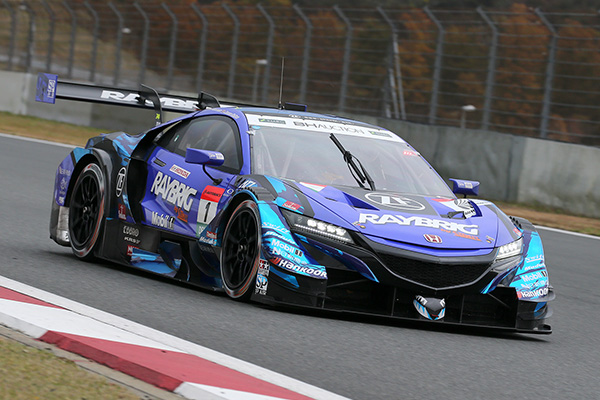 In the end, victory in Race 2 went to the No. 64 Modulo Epson NSX-GT’s Narain Karthikeyan. The battle for 2nd saw the two contestants coming out of the last corner side-by-side. As they accelerated onto the straight, car No. 28 on the outside swung wide but managed to get back in front of No. 11 and take the checkered flag first. However, because of the 1-sec. race penalty previously given to Duval in car No. 28, 2nd place went to the No. 11 BMW M4 DTM’s Marco Wittmann, and 3rd place went to the No. 28 BMC Airfilter Audi RS 5 DTM’s Loic Duval. The first finisher among the LEXUS LC500 cars was the No. 37 KeePer TOM’S LC500 (Ryo Hirakawa) in 8th place, and the first NISSAN GT-R NISMO GT500 to finish was the No. 23 MOTUL AUTECH GT-R (Tsugio Matsuda) in 11th place. 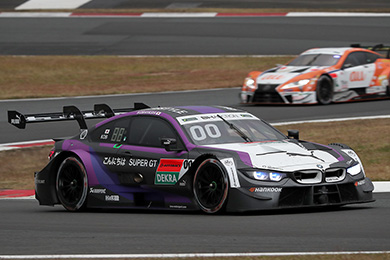 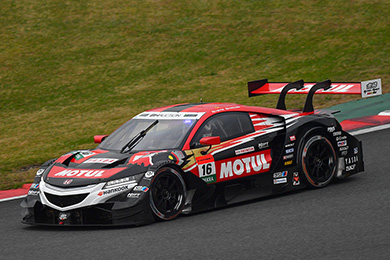 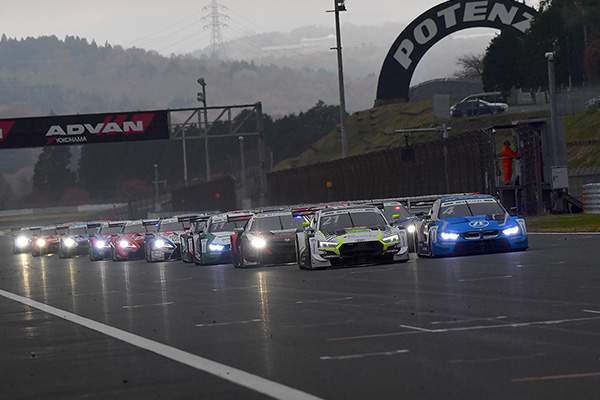 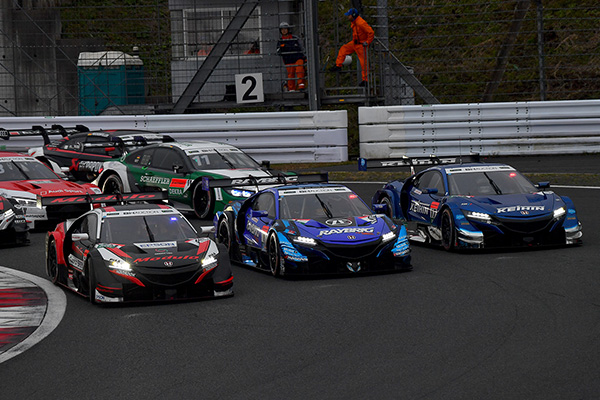 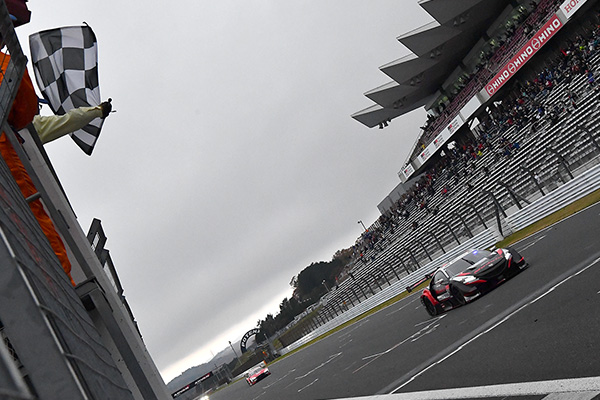 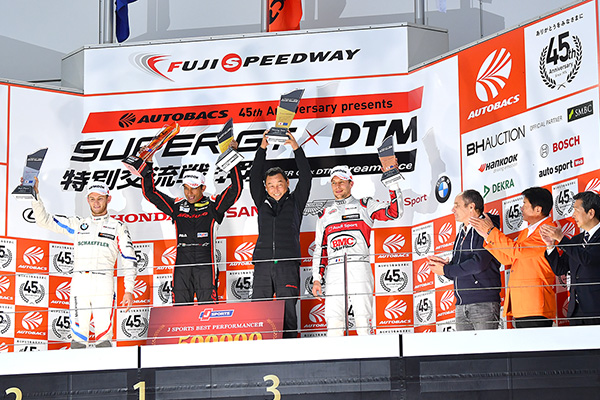