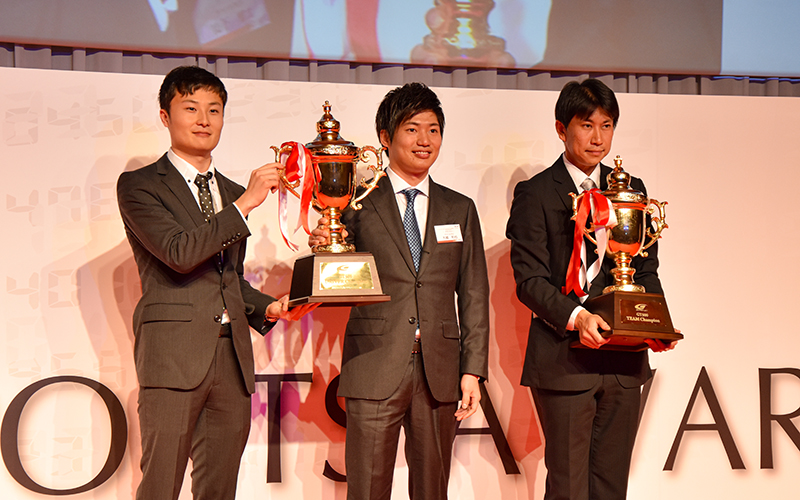 "2019 JAF Motorsport Award-giving ceremony" hosted by Japan Automobile Federation (JAF), the governing body of Japanese motorsports, was held at a hotel in Tokyo on November 29th. Drivers and team representatives who achieved outstanding performance this season in SUPER GT as well as other domestic motorsports were invited and honored for their accomplishment at the ceremony.

Prior to the series awards presentation, JAF paid a special tribute to people/group who achieved a remarkable milestone in the field of motorsport this year. Appearing two years in a row in the special tribute, Kazuki Nakajima, who also competed in SUPER GT's GT500 class, received the Award of Honor from JAF President Kazuhiro Fujii for winning the LMP1 class title of 2018-2019 World Endurance Championship (WEC) along with Keizo Takahashi of TOYOTA GAZOO Racing, the team Nakajima drove for in the championship. 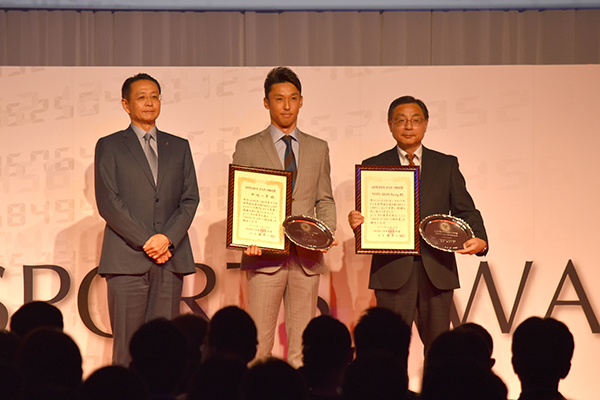 For the SUPER GT awards, the drivers of the top three teams in the driver ranking, including the GT500 and GT300 class champions, and the team representatives from the champion teams were called onto the stage. Champion drivers received JAF Champion Cup, shaped in V, from victory, and a steering wheel, and the second- and third-place drivers were giving with a plaque. 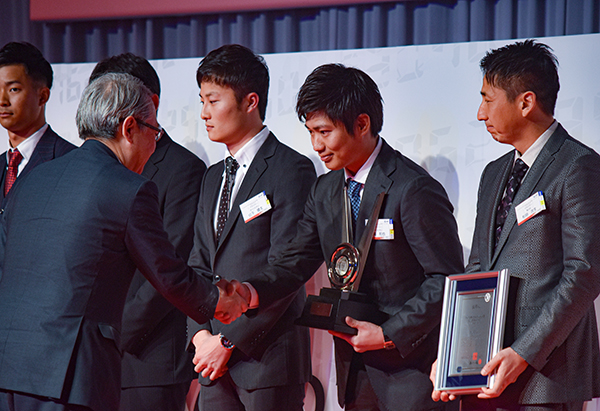 In the award-giving ceremony for the FIA-F4 Championship, Driver championship winner Ren Sato (No.7 SRS/ Kochira Racing) and the top five drivers in the point ranking and Honda Formula Dream Project, which won the team champion two year in a row, were invited to the stage for the honor. 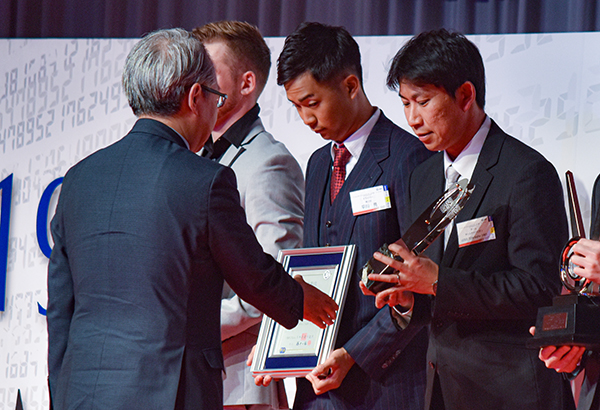 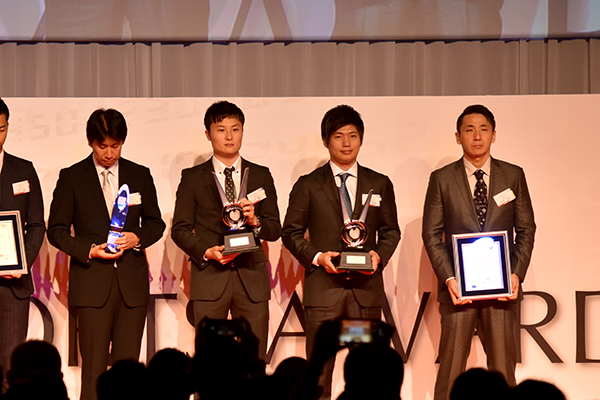 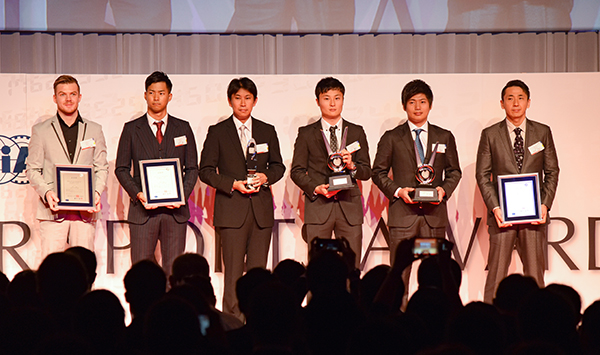 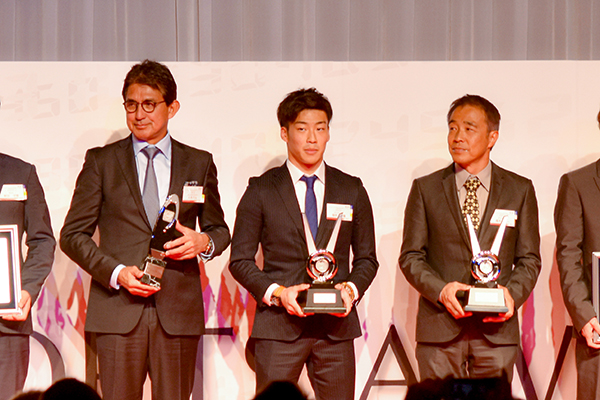 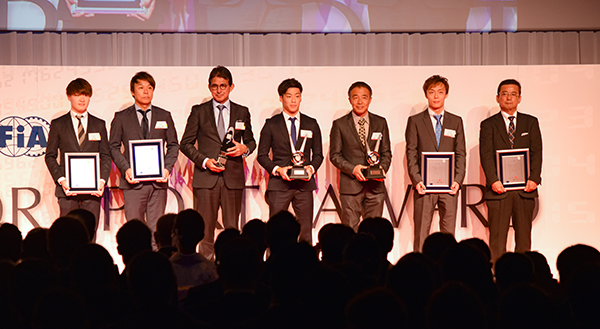 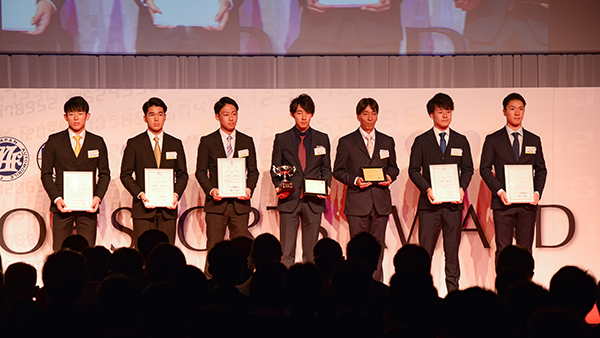 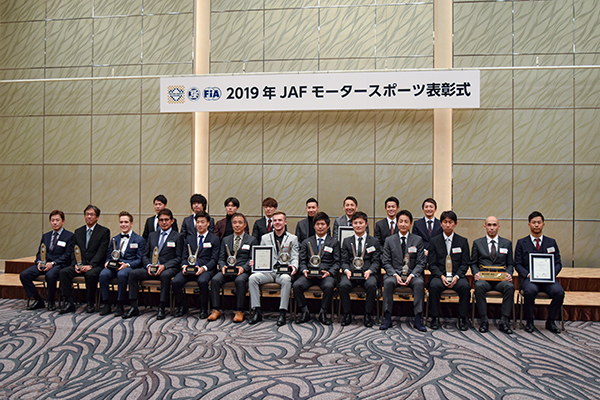 JAF award-giving ceremony was followed by a socialization party, and GTA Co., Ltd, the governing body of SUPER GT, presented their series-awards during the gathering. Driver and team champions of GT500 and GT300 classes received the series champion cup from Kazuhiro Tsuge, Senior executive officer, GTA. In response to questions from Pierre Kitagawa, the Master of Ceremony, the champions from two classes reflected back on their season and also expressed their determination for the next season. 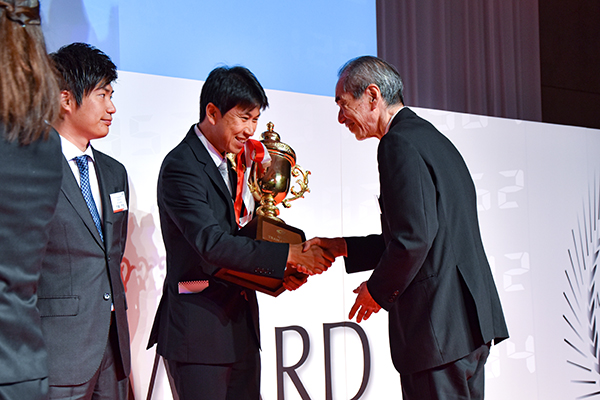 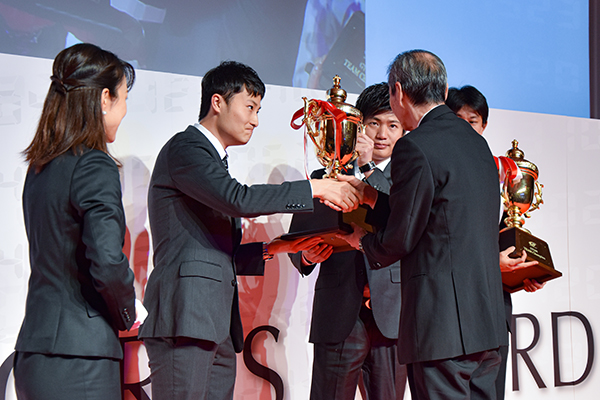 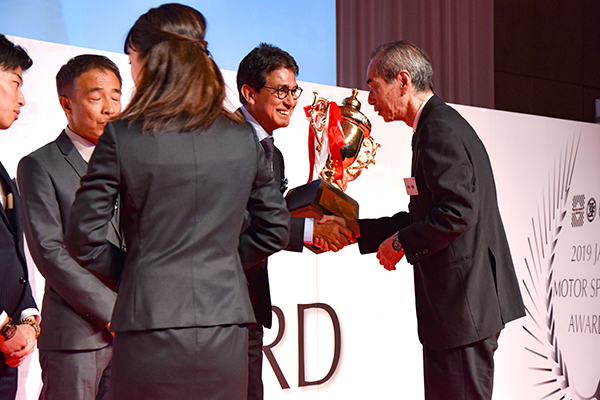 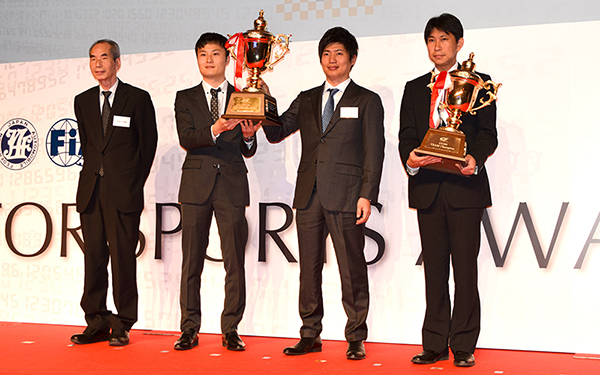 Kazuya Oshima (No.6 WAKO'S 4CR LC500)
(It was a long journey to GT500 title, wasn't it?) Yes, it was my 11th year... and I had to go through many, many things, so I'm really happy. (The trophy you always wanted must be heavy.) Really yes, it finally sunk in and I realize now (that I became champion) <laugh>. So many people support me and root for me and I finally reached here, so I'm very happy. Next year, I will give my best again to go even higher level as a champion. 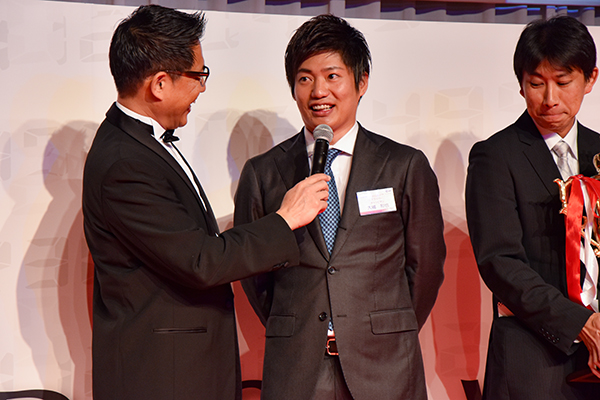 Kenta Yamashita (No.6 WAKO'S 4CR LC500)
(You got GT500 title after only two years) Yes, indeed, even to me it feels like it came boom, boom <laugh>. However, it was never easy. No.37 car (arch rival) was always fast and we were always chased (in the point ranking), so the pressure was heavy. But I'm relieved that we got the title. Next... I will try for back-to-back SUPER GT title next year.

Masaki Saeda (Team engineer, No.37 LEXUS TEAM KeePer TOM'S)
We were able to win the team title as a consequence, but to be honest, Driver (title) was what I wanted the most, so there is a bit of regret in the season in that sense. (You won the title two years ago and you were always engaged in the title contention in past two years) Our two drivers (No.37 Ryo Hirakawa / Nick Cassidy) are fast, so we, the team crew, had to stay focused and concentrate on providing what the drivers need for them to be fast. We will just have to work even harder next year so we can also win the driver title. 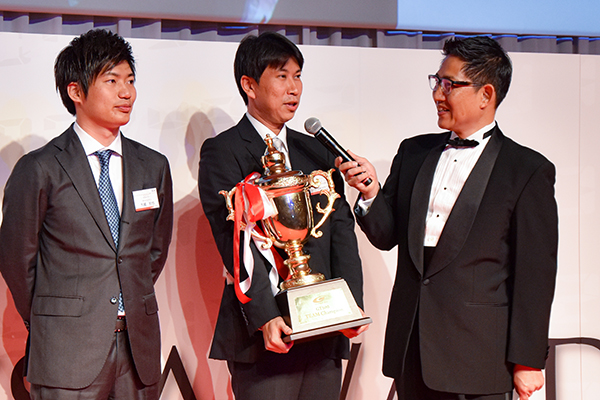 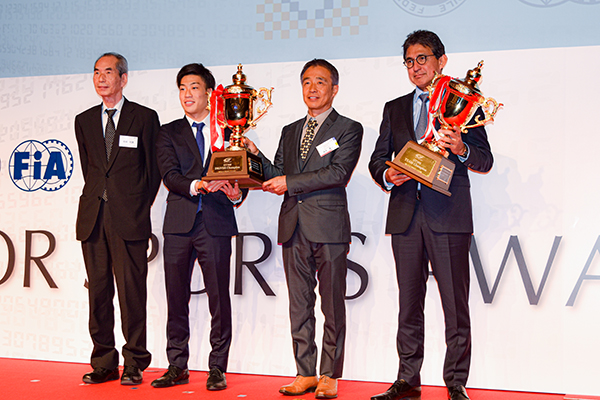 Shinichi Takagi
(It has been 17 years since your last GT300 title) I'm a little embarrassed. <bitter smile> There was no GT3 cars (which are major competitor of GT300 now) 17 years ago, and the fact that I have been able to compete for such a long time like this is because of all the support Aguri (Suzuki) and the team staff have given me. (What is the secret for being able to race for a long time?) Secret is... never lose Aguri from your sight, that's important <smile>. 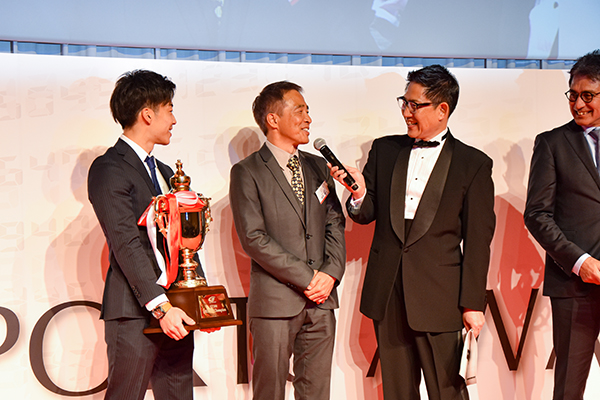 Nirei Fukuzumi
This past one year, it was my first time in GT300 class, my first racing with a Hako car (production road car based race car). It really got confusing many times. But I was blessed with really good team which enabled me to race in a very steady (team) environment. We picked up points at every race and then won the championship. Also, I'm relieved to being able to finish the season without making Aguri (Suzuki) mad. Like Takagi said, I will also try not to lose Aguri from my sight <smile>.

Team Manager Aguri Suzuki
We had a veteran (Takagi) and a freshman (Fukuzumi) this year and our arch rival (No.96 with Morio Nitta / Sena Sakaguchi) had the same structure. When we won the GT300 title 17 years ago, our driver lineup was that Nitta and Takagi... I thought this must be some kind of fate <laugh>. When the final round was over, it was more like "Phew, the year is over now..." than being happy about becoming champion. For the next season, I need to think about the team (structure) thoroughly first and then take on the challenge again.

"FIA Gran Turismo Championship" is an FIA-certified competition that started last year, and the participants of the ceremony enjoyed an exhibition race using the real driving simulator Gran Turismo SPORT after the GTA award ceremony. Eight drivers representing their respective category made entry to the exhibition race, and the drivers were divided into two groups of four for qualifying race where top two from each group advanced to the final race. Representing SUPER GT, Nirei Fukuzumi (GT300 champion / No.55 ARTA NSX GT3) won the qualifier and successfully advanced to the final where he showcased fierce battle with GT300 driver Ritomo Miyata (No.60 SYNTIUM LMcorsa RC F GT3), who represented Formula 3, and other finalists.

Miyata won the final race to keep his winning streak of the virtual race from last year's award-giving ceremony. Fukuzumi fell short at second. The virtual battle ignited the excitement across the floor of JAF ceremony filled with top-class drivers as well as people from all areas of Japanese motorsports. 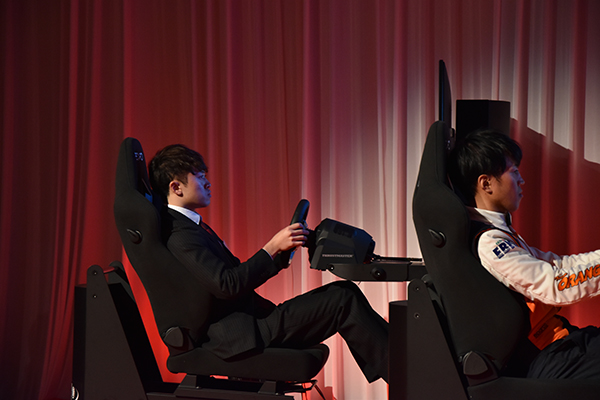 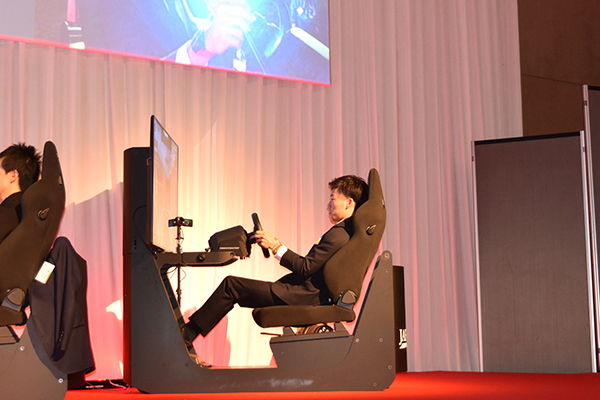