As one of the largest customized car event in Japan, Tokyo Auto Salon 2020, kicking off the first day for the press on January 10th, Honda announced its plan for 2020 motorsports activity and Nissan Motor also revealed the detail of their GT500 team. ARTA to held a presentation session. In the GT300 class, SUBARU informed their entry to the class with BRZ. Saitama Toyopet GB and Cars Tokai Dream28 from GT300 class also introduced their teams competing in the new season. In addition, Saitama Toyopet GB revealed that it will field a GR Supra developed originally by the team under the JAF-GT300 regulations.

Honda will have fresh new faces in GT500 with Fukuzumi, Sasahara, and Otsu joining. 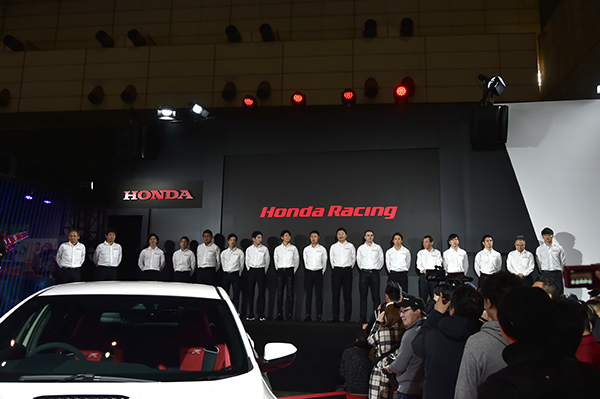 Honda announced its plan for SUPER GT at Tokyo Auto Salon again this year and introduced their drivers in their event "KICK OFF MEETING" held during the special admission hour for the general public in the afternoon. Five NSX-GTs will be fielded by five teams in the GT500 class: No.8 AUTOBACS RACING TEAM AGURI (ARTA), No.16 TEAM MUGEN, No.17 KEIHIN REAL RACING, No.64 Modulo Nakajima Racing, and No.100 TEAM KUNIMITSU. Each team will continue to use the same tire supplier as last year; Bridgestone for No.8, 17, and 100 cars, Yokohama on No.16 car, and Dunlop with No.64 car. As for the driver lineup, No.17 car remains with the same duo of Koudai Tsukakoshi and Bertrand Baguette from last season. However, all other four teams will have a different combination. For No.8 car, Tomoki Nojiri will see GT300 Champion Nirei Fukuzumi stepping up to partner with him. No.16 car will rely its wheel to Hideki Mutoh and newly joined Ukyo Sasahara who became a champion in the Porsche Carrera Cup Japan last year after competing in European formula car races and the Japanese F3 Championship. No.64 car will have Takuya Izawa moving from No.8 car and Hiroki Otsu getting promoted from No.34 car in the GT300 class. Naoki Yamamoto will continue to take the wheel of No.100 car joined by Tadasuke Makino moving from No.64 car. Honda will have three customer-teams fielding Honda NSX GT3 in the GT300 class, and defending champion No.55 AUTOBACS RACING TEAM AGURI will be competing with Shinichi Takagi and rookie Toshiki Oyu. No.34 Modulo Drago CORSE will be driven by Ryo Michigami and Jake Parsons, who is returning to the series after the 2017-season in the GT300 class. No change at No.18 TEAM UPGARAGE with Takashi Kobayashi and Kosuke Matsuura. 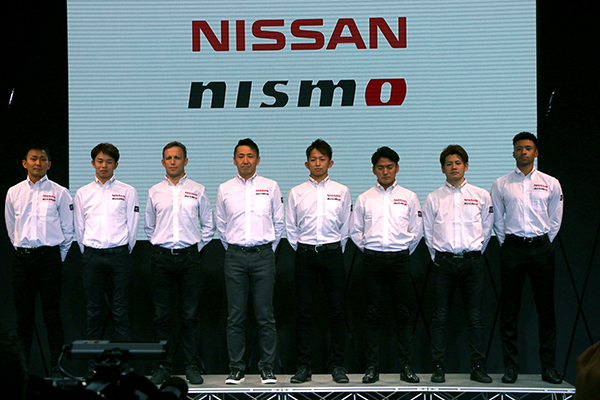 Nissan Motor followed other automakers this year to make an announcement of its GT500 team at Tokyo Auto Salon. NISSAN GT-R NISMO GT500 will be fielded by four teams, totaling four GT-Rs as in last year, with No.3 NDDP RACING with B-MAX and No.23 NISMO wearing Michelin tires. No.12 TEAM IMPUL will use Bridgestone tires. No.24 KONDO RACING will stay with Yokohama tires.

Looking at the driver lineup, No.23 car will continue with Tsugio Matsuda and Ronnie Quintarelli, the same lineup the team accomplished consecutive GT500 titles, and No.24 car also will have no change from last year's driver lineup of Mitsunori Takaboshi and Jann Mardenborough. No.3 car acquired Katsumasa Chiyo to partner with Kohei Hirate. Chiyo used to compete in the GT500 class with GT-R until 2018 and then raced in international GT endurance series and also a race in SUPER GT with a sudden call to the Round 6 Autopolis last year. He is fully returning to the series after one year. No.12 car will have Daiki Sasaki and Kazuki Hiramine, who is moving up to the class after serving the ace driver role for KONDO RACING's GT300 team that entered in the class for the first time last year. 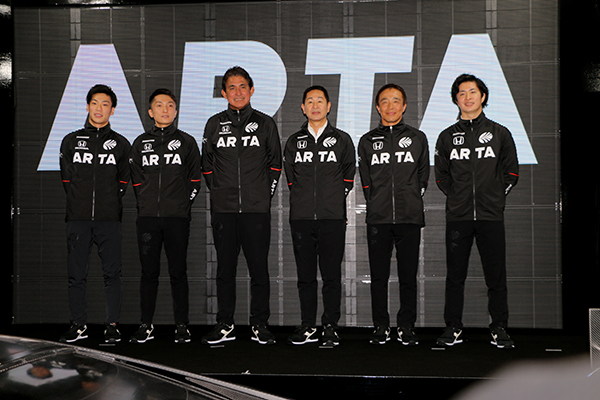 ARTA's announcement was made at the booth of affiliate AUTOBACS Group. As in last year, Team Manager Aguri Suzuki will lead the entire organization and Keichi Tsuchiya will support the team as Executive Advisor. Nirei Fukuzumi, who clinched GT300 class title last year, got promoted to drive No.8 car. He will be racing for the championship in a new model Honda NSX-GT along with his partner Tomoki Nojiri. Defending GT300 class champion No.55 car (Honda NSX GT3) will continue to be led by veteran Shinichi Takagi. Takagi will have a GT rookie as his partner again this year. Toshiki Oyu has been given a chance to make a debut in the series after showing impressive performance in the FIA-F4 Championship and then developing his skills further in the Japanese F3 Championship as well as European formula car racing. 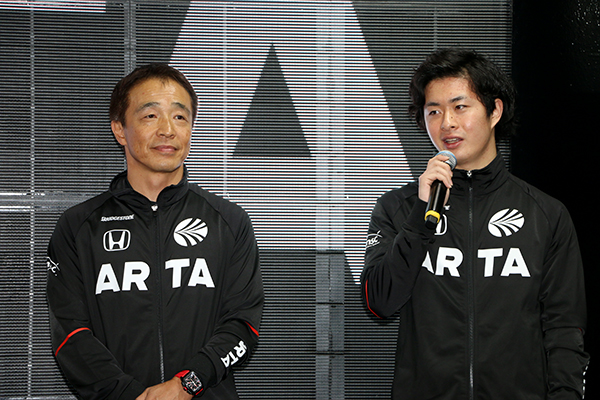 An announcement was made at the SUBARU/STI booth on the continuation of the challenge in the GT300 class with SUBARU BRZ. Like in last year, the team operation will be carried out by R&D SPORT and Makoto Sibuya of STI (Subaru Technica International) will assume the role of Team General Manager. Driver lineup is also stable with Takuto Iguchi and Hideki Yamauchi, a combination entering its fifth season. With an aim to win the GT300 class title, the 2020 BRZ GT300 has undergone various improvements including improved reliability and thermal efficiency in the horizontally-opposed Boxer engine, optimized balance between chassis design and aerodynamics, and improved road holding performance. 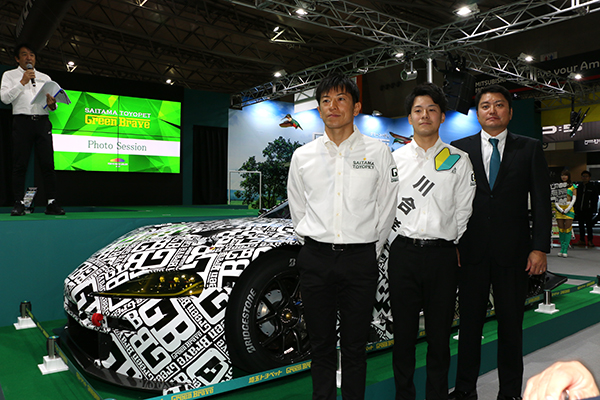 Saitama Toyopet GB, a race team operated by a Toyota dealer, also introduced its team at Tokyo Auto Salon 2020. The team had been competing with a mother-chassis race car built based on flagship Mark X until last season, however, the production of the base vehicle discontinued last year. Saitama Toyopet decided to take a shift to compete in the series with a JAF-GT300 race car originally developed by them based on GR Supra. After successful progress in SUPER GT, Saitama Toyopet GB is now entering its third year and taking a huge challenge. Hiroki Yoshida is continuing on from last year to drive for the team. As for the other half of driver lineup, the team has granted the seat to Kohta Kawai who finished third overall in the FIA-F4 Championship last year. 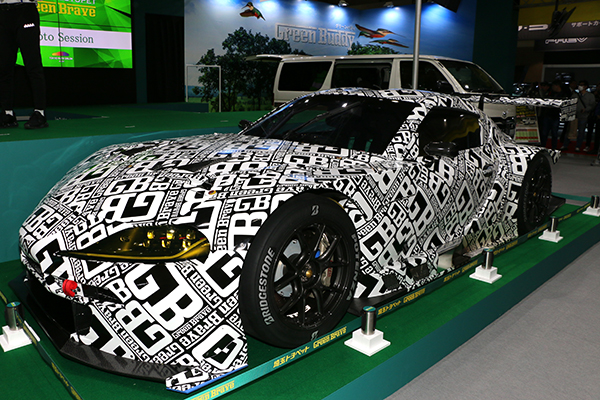 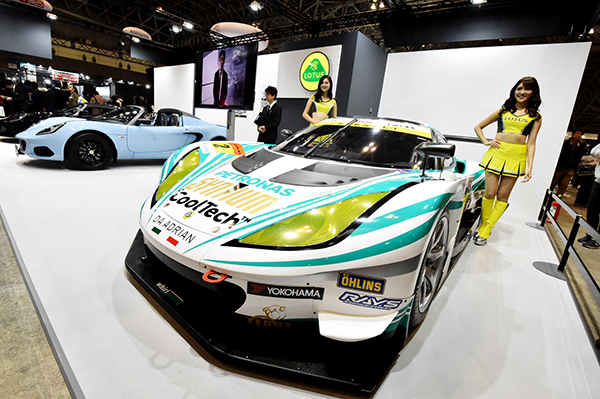 No.2 Cars Tokai Dream28 competing with a mid-engine Lotus Evola MC next season again introduced their team at the booth of Lotus. Long-time icon of the team, Kazuho Takahashi, had announced his retirement from SUPER GT last year. 'Who will be the new partner of Kato?' had been one of the topics in the series, but Masataka Yanagida with experience of winning both GT300 and GT500 championships is making his come back to take the wheel of Evola MC. Despite absence of Kato, Yanagida, and Team principal Takahashi at the presentation, they appeared and sent messages in a video. 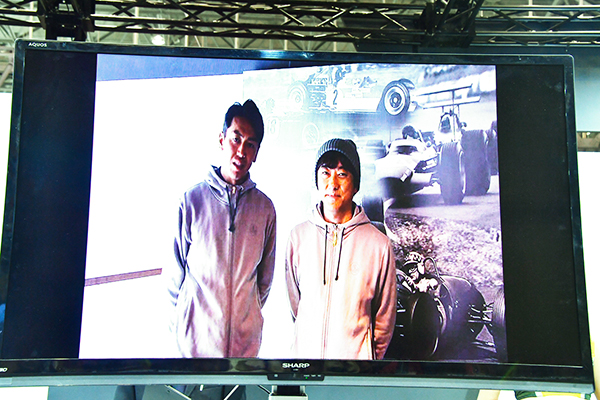 No.4 GOODSMILE RACING & TeamUKYO had already revealed their plan for 2020 (retaining the same organization as 2019), but the team showcased their new model AMG GT3 with new livery at Mercedes Benz booth. 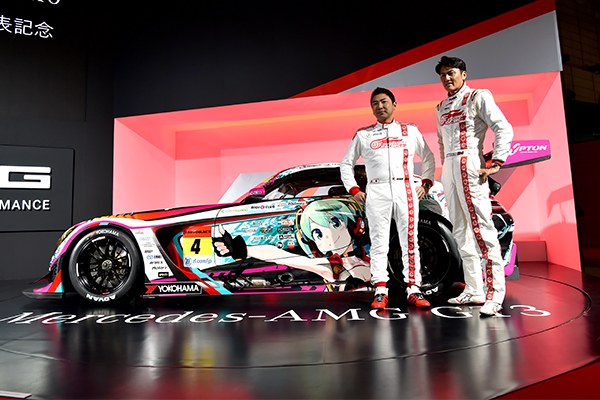