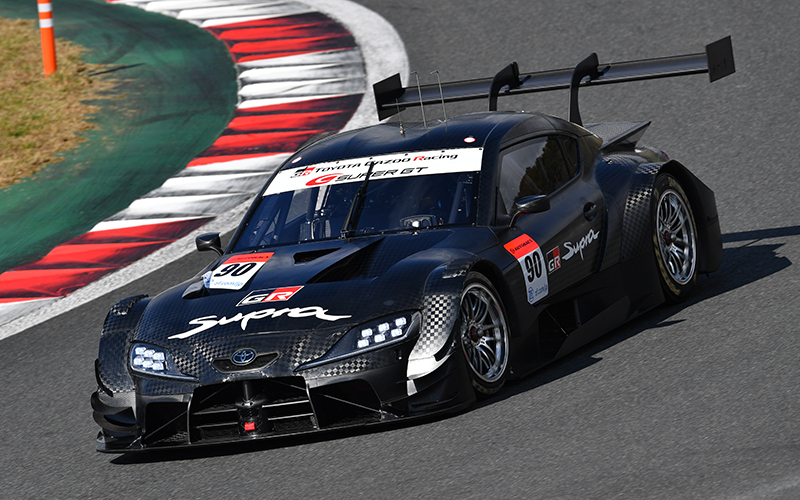 On February 7, Toyota Motor Corporation and TOYOTA GAZOO Racing announced their motorsport program for 2020. As the Toyota racing company, TOYOTA GAZOO Racing is dedicated to the quest of using its motorsports activities to contribute to “Making Ever-better Cars,” with the eventual hope that the new automobile its contribution helps develop will increase the number of car fans.

As announced previously, Toyota will be entering the GR Supra in the GT500 class of SUPER GT. Through TOYOTA CUSTOMIZING & DEVELOPMENT Co., Ltd. (TCD), six teams and six cars will be supported for the 2020 season. As drivers, Sacha Fenestraz and Ritomo Miyata will be moving up to the GT500 class for the first time.

Among the teams on this year program is the new team No. 14 TGR TEAM WAKO'S ROOKIE（TGR） that replaces Team LEMANS, which announced its withdrawal earlier. The new team’s drivers are last season’s GT500 champion Driver Kazuya Oshima and Sho Tsuboi, who drove for team No. 19 last season. The team will be running on Bridgestone tires.
Filling Tsuboi’s spot on the No. 19 TGR TEAM WedsSport BANDOH will be Ritomo Miyata, who moves up to GT500 after scoring one win last season in the GT300 class. He will be driving to win with regular GT500 driver Yuji Kunimoto.
TEAM TOM'S will again be entering two cars this season. The No. 36 TGR TEAM au TOM'S team has Yuhi Sekiguchi as its first driver, and he is joined by Sacha Fenestraz, who fought for the title in the last round in the GT300 class. There are high hopes for Fenestraz as a strong driver who won the All Japan F3 championship title last year. As for last year’s Team Champion, the No. 37 TGR TEAM KeePer TOM'S, drivers Ryo Hirakawa and Nick Cassidy will team together for the 4th consecutive year to go for the Driver and Team championships for the first time since 2017.
The No. 38 TGR TEAM ZENT CERUMO team also remains unchanged with the always strong driver pair of Yuji Tachikawa and Hiroaki Ishiura. As the only driver to win the championship with the old Toyota Supra, Tachikawa will surely be looking to claims wins and the title with the new GR Supra.
The No. 39 TGR TEAM SARD will again have as its drivers the former F1 driver Heikki Kovalainen and Yuichi Nakayama, who will be out to win their first title since 2016.

In the GT300 class, apr will enter two GR Prius PHV (JAF-GT300) cars as they did last season. There will also be one more GT3 spec LEXUS RC F GT3 cars than last years to bring the total to four. The new team is the No. 244 Max Racing tea and its drivers, Rintaro Kubo and the 20-year-old Atsushi Miyake who finished 2nd in the FIA-F4 championship last season, will be participating in SUPER GT for the first time. Also, due to Miyata stepping up to the GT500 class, joining the No. 60 LM corse team will be Shunsuke Kohno, who competed with distinction in the FIA-F4 championship last season. As for the No. 35 Panther arto Team Thailand, the drivers for this season have not yet been announced. The No. 60 LM corse team will be competing on Michelin tires and the No. 96 K-tunes Racing team on Dunlop tires.
As announced recently at the Tokyo Auto Salon, the No. 52 Saitama Toyopet Green Brave team will be competing with its own independently developed JAF-GT300 regulation GR Supra.
In addition to this, Toyota will also be supporting entries in the 2020 TGR Driver Challenge program. (TGR-DC. The name has been changed from TDP). A driver from this program competing in the GT300 class, namely Kazuto Kotaka (ADVICS muta Racing INGING) will also be supported.

Furthermore, young drivers from the TGR-DC training program competing in the FIA-F4 championship will also be supported. As a venue for exchange with car fans, Toyota will be a joint sponsor in the “MO-SPO Festival 2020 SUZUKA” event to be held on March 7th (Sat) and 8th (Sun).