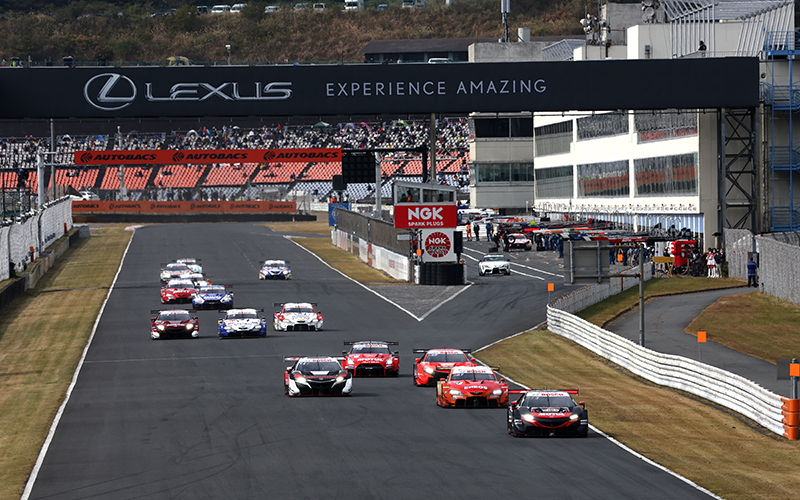 After 2 weeks from Round 6, the 2022 AUTOBACS SUPER GT Round 7 "FAV HOTEL AUTOPOLIS GT 300km RACE" will be held on October 1st (Sat) and 2nd (Sun) at Autopolis in Oita Prefecture. The 2022 season is only remained with 2 races including upcoming one. Eyes will be focused on the survival for clinching the title at Round 7. Being in a deficit of 21 or more points from the point leader before the final round would mean an early exit from the title contention, and, thus, the teams short of the points should be keen to score a high point, no matter what. Teams in the upper positions of the ranking, on the other hand, would want to add as many points as possible. In addition, considering many teams would get their success weight reduced, the race could get ever tighter and fierce at Autopolis.

■Nissan Z's been on podium in all races up to this point. See no obstacles to stop the streak at Autopolis.

In the driver ranking post Round 6, the Nissan Z GT500 that just debut this season are dominating the top 3 places with No.3 CRAFTSPORTS MOTUL Z (Katsumasa Chiyo / Mitsunori Takaboshi) leading the squad. Scoring 2 wins by showing the same strong performance as predecessor Nissan GT-R at Suzuka Circuit as well as a win at previous SUGO race along with podium-finishes at Okayama and Fuji, Z's been mighty strong and fast at any kinds of circuit in its only first season.
Considering Autopolis, the stage of Round 7, was a circuit where GT-R left a good track record and is a high-speed, technical track similar to Suzuka, Z's strong performance is much expected. However, the top 2 teams in the point ranking, No.3 car and No.12 CALSONIC IMPUL Z (Kazuki Hiramine / Bertrand Baguette), have a heavy success weight (SW). SW rule defines that, for up to sixth race participation, the success weight is calculated by multiplying the points obtained by the drivers (if driver combination changed, then whichever higher would be multiplied) by 2kg. For 7th race participation, it would be multiplied by 1kg. All 15 cars of GT500 class have participated in all events, and, therefore, the upper positions in the point ranking will have the SW reduced from previous SUGO. However, No.3 and No.12 cars will still have a success weight of over 51kg and they have to have their fuel flow restrictors narrowed by 1 level. The adjustment could have significant impact especially at Autopolis where there are many large elevation changes. The two teams would likely to be taken a strategy to firstly target as many points as possible and then may be podium if an opportunity comes by rain, etc. like at the SUGO race.
In contrast, teams that could most likely be going for the victory would be No.23 MOTUL AUTECH Z (Tsugio Matsuda / Ronnie Quintarelli), which fell short of the win despite running at top position in recent 2 races, and No.24 Realize Corporation ADVAN Z (Daiki Sasaki / Kohei Hirate), which the highest position captured so far in this season is only 3rd place at the Round 4 Fuji. 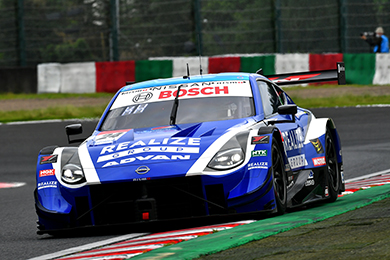 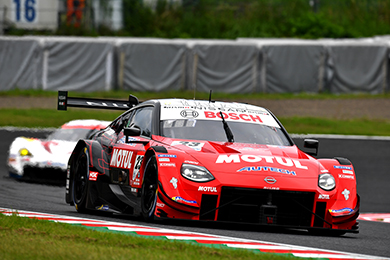 ■NSX-GT squad would want to show off its speed here. GR Supra could stand tough against the rivals in the race.

Last year's Autopolis race was won by No.8 ARTA NSX-GT (Tomoki Nojiri / Nirei Fukuzumi), which completed 4 consecutive pole-to-win by an NSX-GT. Considering the aforementioned track characteristics of Autopolis, the circuit could be advantageous to NSX-GT that boasts good cornering ability. However, if indeed an NSX-GT wins, then, surprisingly, it would be actually a first victory of the car. Nonetheless, the car has finished on the podium every time in recent 4 races except 1 event. To pick victorious candidates from such NSX-GT squad, the first team would be No.8 car that has pulled off a win many times by excellently executing their strategy. Next would be No.16 Red Bull MOTUL MUGEN NSX-GT (Ukyo Sasahara / Toshiki Oyu) that finished Q1 qualifying of previous SUGO event at 1st place and then captured 3rd place in the race to put the team on the podium after a long while. The team clinched the pole position and led the race in early stage at last year's Autopolis, but it was forced to retire due to a problem in the car. Expectation increases for the team to pay back for last year's disappointment at upcoming event. 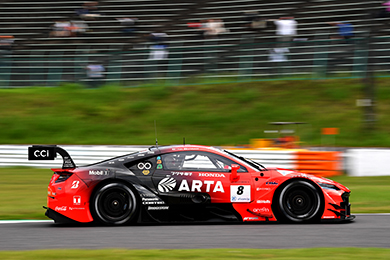 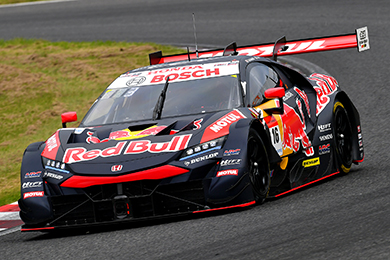 TOYOTA GR Supra GT500 has a sound history at the track too with a second-place podium finish by No.38 ZENT CERUMO GR Supra (Yuji Tachikawa / Hiroaki Ishiura) last year and a win in 2019 by predecessor LEXUS LC500 fielded by No.39 DENSO KOBELCO SARD LC500 followed by another LC500 at 3rd place (no event held in 2020). Furthermore, the fleet dominated the podium in 2018, which can draw a conclusion that Autopolis is not an unfavorable place to GR Supra and LC500, like Suzuka. The car can be expected to show a good battle with 2 rival cars. Qualifying in second and showing speed in rainy race at previous SUGO, No.38 car with regained momentum is certainly a candidate for the win along with former Autopolis winner, No.39 DENSO KOBELCO SARD GR Supra (Yuhi Sekiguchi / Yuichi Nakayama) with rather light SW. No.19 WedsSport ADVAN GR Supra (Yuji Kunimoto / Sena Sakaguchi) has captured pole-positions 4 times this season, and, with light SW, it would be a chance for the car to finally achieve pole-to-win. 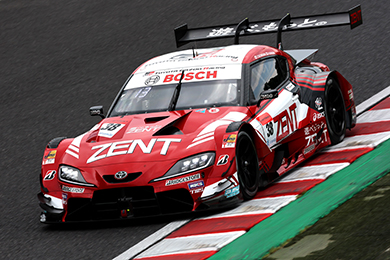 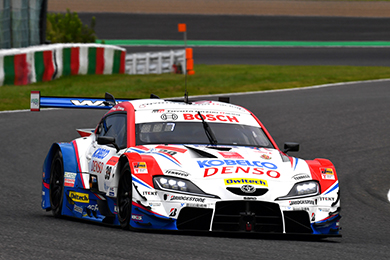 Round 7 venue Autopolis is a high-speed, technical track that shares similarities with Suzuka Circuit, if compared with other circuits. Hence, it can be said that the cars that can be strong would be the same as Suzuka. In addition, with the high altitude of Autopolis, cars with a large displacement or supercharger like turbo engine could be having advantage. On the other hand, the track surface of Autopolis is known to be tough on the tires, therefore, cars that can take a strategy of no tire change or changing only 2 tires may not be able to enjoy the advantage such strategy can create. By considering these factors, cars to watch at the Kyushu event would be TOYOTA GR Supra and BRZ out of the GT300-regulated cars and RC F GT3 and NSX GT3 out of the FIA GT3 race cars.
For the victorious candidate, No.61 SUBARU BRZ R&D SPORT (Takuto Iguchi / Hideki Yamauchi) tops the list. The team managed to qualify in second even with a success weight (SW) of 100kg, the maximum possible weight, at last year's Autopolis (Round 6). The team went on to finish in third in the race which gave a big step forward to clinching the title. Ranked at 4th in the point ranking with a 51kg SW, which is not light comparing with the rivals though, still, the team can be expected to show even better performance than last year. 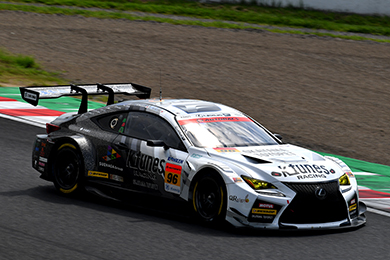 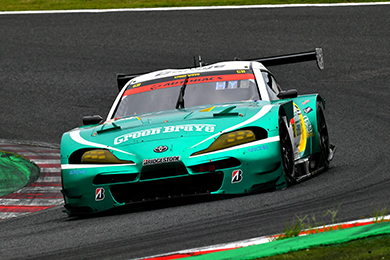 Opponents of the Subaru team would be No.96 K-tunes RC F GT3 (Morio Nitta / Shinichi Takagi) and No.52 SAITAMATOYOPET GB GR Supra GT (Hiroki Yoshida / Kohta Kawaai). These two teams run a race car that is strong on high-speed technical circuits. No.96 car clocked a fastest lap time in the qualifying of previous SUGO event, although the lap time got canceled due to a mistake a mechanic made in the scrutineering. Nonetheless, the car made a great comeback from the last place on the grid to finish in 8th position in the race. It can well be competing for the top position especially with light SW. For No.52 car, besides the advantage the car has and sound record of 3rd in the qualifying and 4th in the race last year, Autopolis is the home circuit to its ace driver Yoshida who is from Kumamoto Prefecture. Rooting could give extra power. Although it was not included in the list of cars that can be strong at Autopolis stated above, No.31 apr GR SPORT PRIUS GT (Koki Saga / Yuhki Nakayama), the winner of last year's race that completed a pole-to-win, deserves to be named a candidate for the win. It does not have turbo, but if the motor-power that the hybrid produces worked effectively, then the possibility of consecutive victory can be quite high for the team.
With only 2 races remaining in this season, the title contention is reaching the climax. Currently, No.56 REALIZE NISSAN MECHANIC CHALLENGE GT-R (Kiyoto Fujinami / Joao Paulo de Oliveira) and No.10 TANAX GAINER GT-R (Riki Okusa / Yusuke Shiotsu) are a few steps ahead of others. If these two teams climb on the podium at Autopolis, they can expand the comfortable lead even more. However, their SW are getting heavy and, for No.10 car, ace driver Ryuichiro Tomita will be absent for the Round 7 due to his participation in an overseas GT race. We can, then, expect the young rookies, Okusa and Shiotsu, to show energetic driving. 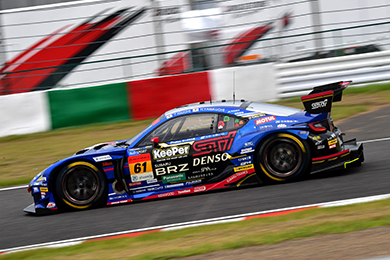 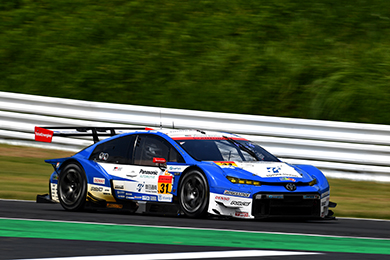